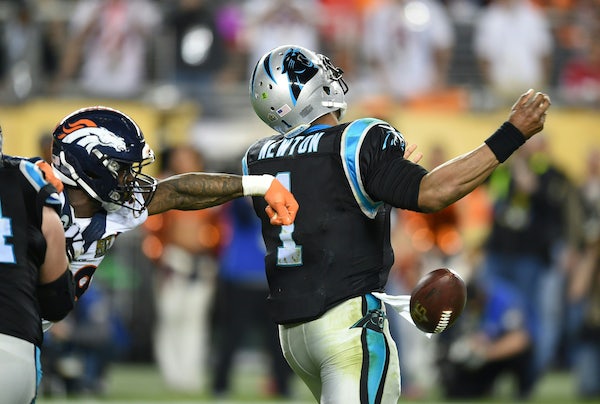 The Denver Broncos’ defense stuck to the script last night. (The script is scaring the crap out of the other team.)

The fact that Carolina Panthers quarterback Cam Newton didn’t dive to protect a fumble that his team ultimately lost has, unsurprisingly, been a major part of the post-game narrative. That fumble was a dagger that led to a Broncos touchdown that put them two scores up and effectively ended the game.

But to hear the Broncos tell it, the moment the momentum shifted was four quarters earlier, when Cam Newton fumbled into the end zone six plays into Super Bowl 50. “That play did it,” linebacker Brandon Marshall said. “That play rattled [Newton]. We got in his head like that. We got in his mind. He hasn’t been harassed like that all season.”

In many ways, last night’s Denver victory looked a lot like its victory over New England two weeks before: they got inside the quarterback’s head early and stayed there. Aqib Talib committed violent penalties for the sole purpose of terrorizing receivers. The Broncos frontline blitzed and blitzed and blitzed, repeatedly pressuring, knocking down, and sacking Newton, who started anticipating hits. Two forced fumbles were the difference in this game and, looking at how hard Denver was hitting Carolina, it’s almost shocking they didn’t cause more. In particular, Super Bowl MVP Von Miller and DeMarcus Ware were unreal, twin berserkers wreaking havoc on Newton and Carolina’s much heralded run game and obliterating everything in their path.