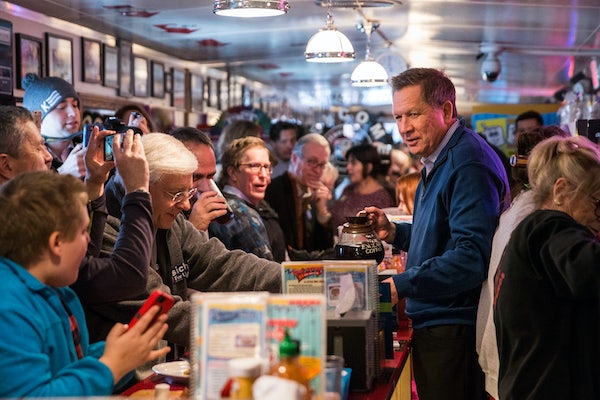 Shortly after 9pm, both ABC News and NBC News were projecting the Ohio governor would edge out Chris Christie, Marco Rubio, and Jeb Bush to win the most votes in the highly competitive establishment lane.

Kasich has benefited from a perfect storm this week. Rubio stumbled on the debate stage Saturday night, repeating rehearsed lines and attracting savage attacks from Christie. Those exchanges may have sent supporters to Kasich. The Ohio governor also profited from high turnout, which may have sent him independents attracted to his more moderate stances on Medicaid and gay marriage. He also made the shrewd decision to set himself up as the lone “happy warrior” in this race, setting himself apart from the other establishment candidates who have blanketed New Hampshire television with vicious attack ads for months.

Kasich can now make at least a plausible case that he should be the establishment alternative to Donald Trump and Ted Cruz. With Christie and Bush saying they will fight on past New Hampshire, the primary may stretch out for weeks before the establishment coalesces around a standard-bearer.