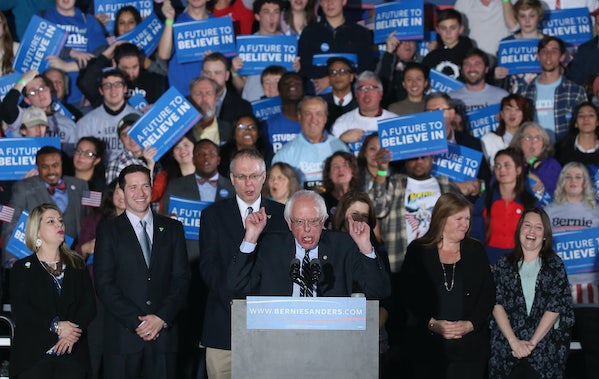 Democratic Socialism got 20 minutes of airtime tonight, thanks to the people of New Hampshire.

When Bernie Sanders took the podium tonight to make his victory speech, he took full advantage of the exposure, repeating almost his entire campaign platform, as well as an invitation to donate to his campaign online.

Sanders hit all his high notes, from oligarchy to money in politics to single-payer healthcare. We should expect nothing less from the most relentlessly on-message candidate in the running.

Tonight’s Republican frontrunners also had words for Sanders, perhaps a sign that he is beginning to register as a possible general election opponent to hopefuls on the right.

In his post-primary speech, John Kasich joked that, “Bernie talked so long I thought he was gonna hit his 77th birthday,” something of an age-jab from the 63-year-old Kasich at the 74-year-old Sanders.

Trump, meanwhile, had this to say about the Vermont senator:

“First of all, congratulations to Bernie, in all fairness, we have to congratulate him. But I heard part of Bernie’s speech. He wants to give away our country, folks! We’re not gonna let it happen. ...We wish him a lot of luck, but we’re gonna make America great again, and we’re gonna do it the old-fashioned way.”