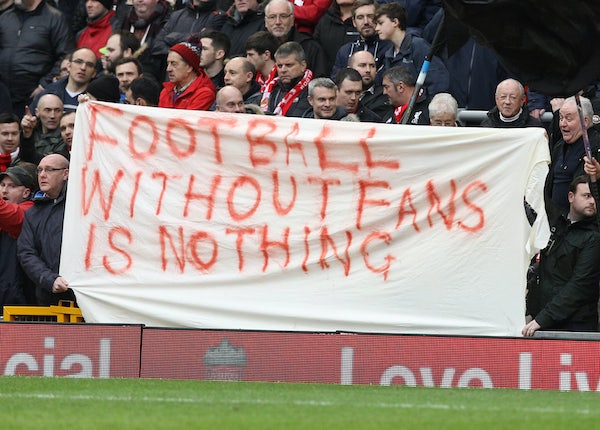 Anger over rising Premier League ticket prices has been simmering for years, but on Saturday around 10,000 Liverpool fans, including longtime Reds defender Jamie Carragher, took a stand and walked out of their side’s home match against Sunderland in the 77th minute. It seems to have worked. Today, the club announced its decision to cancel plans to raise ticket prices, marking a historic victory for fans who have increasingly become priced out of the game they helped to popularize.

It remains to be seen whether Liverpool’s concession will spread to other clubs. Ticket prices are increasing all across Europe—on Tuesday, Borussia Dortmund fans bizarrely threw tennis balls onto the pitch in protest—but the Premier League, the richest of the rich, is by far the worst culprit. Flush with cash from a new £8.3 billion television deal, English teams have chosen to raise ticket prices instead of investing that money back into their supporters. Last week, Arsenal, one of the clubs with the highest prices, backed down from plans for another price hike after an online fan backlash. And it’s not over yet: The Telegraph reported Tuesday that the Football Supporters’ Federation is in talks to stage a massive wave of protest across all 20 Premier League teams.