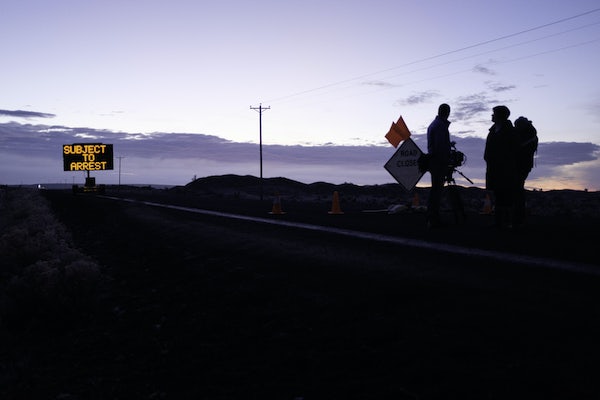 The Oregon standoff is finally over.

The four remaining people occupying a federal wildlife refuge in eastern Oregon turned themselves in to federal officials on Thursday, ending a standoff that had lasted for over a month. After posting videos saying that they were willing to die on Wednesday night, in response to being surrounded by FBI and other law enforcement, the four agreed to surrender on Thursday morning.

That mostly went according to plan. Three of the occupiers turned themselves in without incident. But the final person at the refuge, David Fry, refused to leave, prompting a negotiation with the FBI that lasted for over an hour. Fry was clearly extremely disturbed, and said he had a gun to his head while he spoke to FBI negotiators and others, including Franklin Graham. He spent most of the time ranting about familiar topics in the standoff—the Constitution and Barack Obama—as well as more esoteric, Alex Jones-y ones, like UFOs, government-released chemicals that are affecting the populace, and his personal struggle to find work and get access to medical marijuana.

One of the occupiers, LaVoy Finicum, was killed by law enforcement at the end of January, shortly after the standoff’s leaders and organizers, Ammon and Ryan Bundy, were arrested. The Bundy brothers’ father, Cliven Bundy, was arrested Wednesday night for his role in a 2014 armed standoff, and will appear in court for the first time this afternoon.