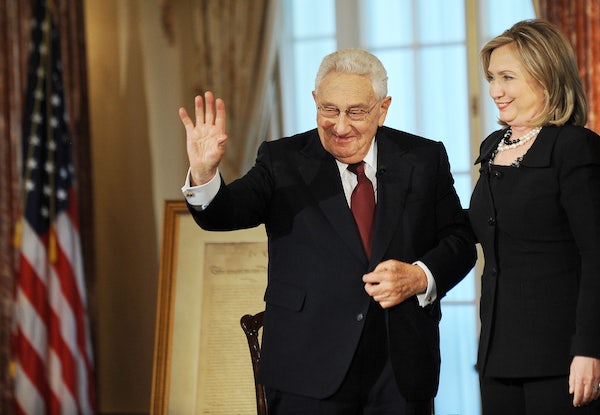 This is why Bernie Sanders keeps talking about Henry Kissinger.

In the foreign policy section of tonight’s Democratic debate, Sanders has sounded a bit like my AP U.S. History teacher, who was cool as hell and introduced me to Howard Zinn and the Grateful Dead. He’s talked about Mosaddegh, the democratically elected Iranian leader that the United States overthrew in 1953. And he’s talked a lot about Henry Kissinger.

Sanders may have exaggerated some of the negative consequences of some of Kissinger’s actions and policies—the idea that the opening to China was bad because it cost American jobs seems like an overstatement. But he’s totally right to call Clinton’s relationship with Kissinger into question, as his foreign policy was disastrous and led to incredibly destructive consequences around the world, from Chile to Cambodia. (For more on the relationship between Clinton and Kissinger, this story is a good place to start.)

Sanders has struggled to articulate a core foreign policy throughout the campaign. Though he’s made small strides, it’s clear that he still isn’t particularly comfortable venturing out on his own. So he’s sticking to his core message, which is that Hillary Clinton’s foreign policy judgment has led to disastrous, unforeseen consequences. And her relationship with Kissinger is a proxy for that argument.