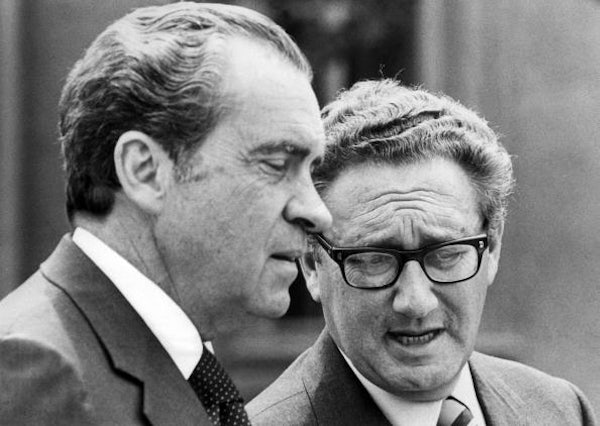 How rude of Bernie Sanders to bring up the Vietnam War.

Hillary Clinton made Henry Kissinger an issue in the Democratic primary by citing his praise of her tenure as secretary of state. In last night’s debate, Sanders took the opportunity to remind viewers that Kissinger is not seen as a sage by everyone. As noted by Gawker, when Sanders brought up Vietnam, one of the PBS moderators whispered, “Oh, god” into her mic.

Now, the moderator (it sounded like Judy Woodruff) could have been responding to any number of things. But it’s easy to make the argument that this hot mic moment reveals a deep status quo bias at PBS. Over the decades, Kissinger has been a frequent guest on the flagship Newshour program, where he is invariably treated as a wise man. In the world of PBS newscasting, it’s simply in bad taste to bring up the possibility that Kissinger—based on his policies towards Vietnam, Cambodia, Chile, Bangladesh, and other countries—might deserve the title of war criminal. Going against the grain of this status quo bias, which exists at other media organizations as well, is going to be a major challenge for Bernie Sanders.