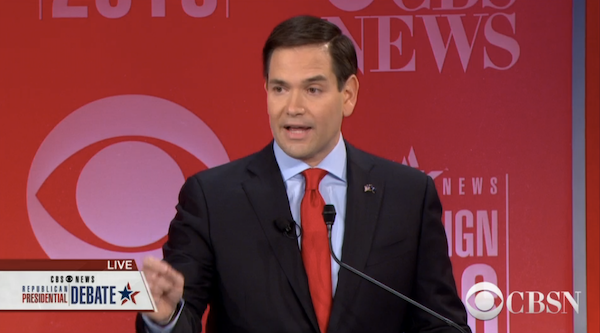 Once upon a time, the Rubio-Lee child tax credit was the centerpiece of a newish brand of family-friendly compassionate conservatism that was said to be the future of the Republican Party. With the rise of Trumpism, Rubio’s proposal has gotten less attention, but at tonight’s Republican debate in South Carolina the senator was given a chance to defend it from the accusation of liberal-esque social engineering.

“Family is the most important institution in society,” he went on, to applause. “You cannot have a strong country without strong families.”

True. But Rubio’s tax credit is not fully refundable, meaning that the poorest families will benefit least from it. It’s not clear if this is a feature of Rubio’s plan, or a bug; some of his defenders have praised the credit’s meager provisions for poor families as a useful correction for naughty single mothers. So much for parenting being the most important job there is.