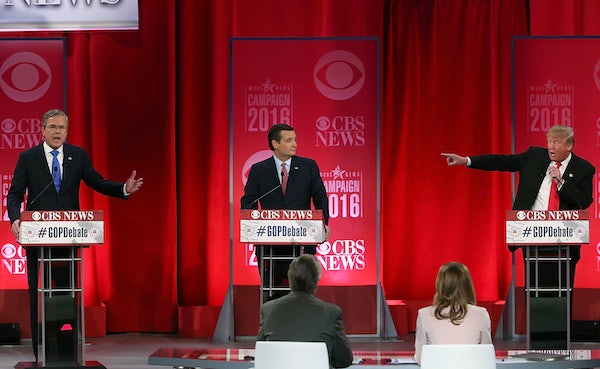 The ninth battle between the Republican presidential candidates will be remembered as the night when several grown men had to be repeatedly called children to get them to stop yelling into microphones about which one of them is a tattle-tale and/or a liar. It all fell apart when Ted Cruz suggested Donald Trump is secretly pro-choice.

Trump brought up the Carson-vote-theft fiasco in Iowa, then accused Cruz of perpetrating a similar scam against him in South Carolina via robocall.

“He’s a nasty guy,” Trump concluded, as the crowd broke into murmurs and Cruz recalled that Trump had compared Carson to “a child molester.”

From there it was mostly shouting, with Bush and Carson dragged into the fray.

“We’re in danger of driving this into the dirt,” moderator John Dickerson warned, but of course the bus was already deep in the mud.