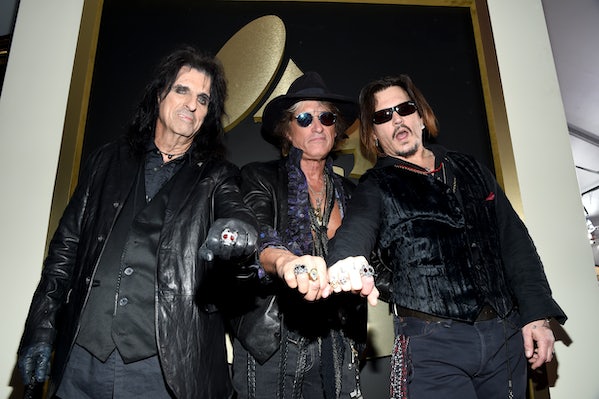 Why is Johnny Depp playing guitar with Alice Cooper and Joe Perry?

The Hollywood Vampires are a group of wax figures who promote a regressive form of music known as “classic rock”—in the Grammy pre-show, Joe Perry said that he was looking forward to their performance, because “classic rock was coming back,” which suggests that Joe Perry has not listened to music in 2015 or, more likely, since Aerosmith recorded “Pink.”

Their performance tonight will be honoring the legacy of Motörhead’s Lemmy, who was fucking cool (in an effortless way, not a Johnny Depp way).

The band was formed in 2015 by Alice Cooper, to honor a drinking club he formed in the ‘70s, the “Hollywood Vampires.” That group’s membership was more esteemed (and ridiculous) than this one’s: it included Cooper, Keith Moon, Ringo Starr, Micky Dolenz and Harry Nilsson, which means it was actually probably terrifying rather than fun. (John Lennon and Marc Bolan were also members.)

The rest of the album, though, sounds like what you would expect Johnny Depp to make with his 65 year old friends in 2015, which means it sounds like what would happen if you left a Deep Purple record out in the sun for too long:

Duff McKagan, who plays bass in the Hollywood Vampires, is cool.

Update: The Hollywood Vampires were even worse than expected.