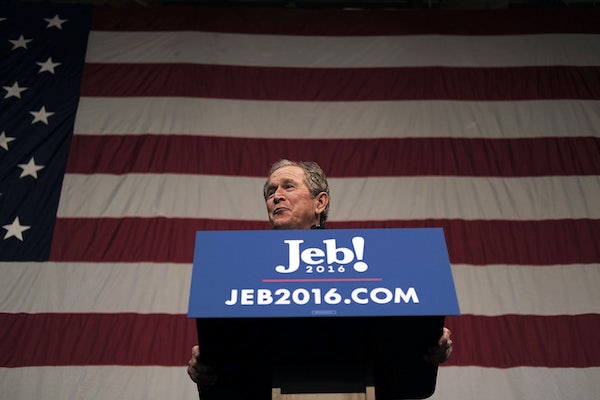 In a general-election scenario, Jeb’s decision to wholeheartedly embrace his brother and his legacy would amount to political malpractice. But Jeb has been forced to throw caution to the wind in the hopes that the affection South Carolina Republicans hold for George W. will keep him alive in the primary race.

Unfortunately for Jeb, the early evidence indicates this may not be enough. One unnamed Republican told Politico that it was “galactic-level stupid” for Donald Trump to have had the audacity at Saturday night’s debate to remind voters that 9/11 occurred on George W.’s watch and that the Iraq War was a “big fat mistake.” But the first poll in the debate’s aftermath shows Trump in the lead in South Carolina with 35 percent of the vote, compared to Jeb’s 7 percent.

Furthermore, as both Benjy Sarlin and Byron York report, respect for the Bush family does not translate into a vote for Jeb. Republicans’ “feelings about Jeb just don’t rise to the level of their devotion to W.,” York says. And many are “deeply uncomfortable with voting for another” Bush, Sarlin writes. He adds that even Republicans who think Trump went too far are still considering voting for him.