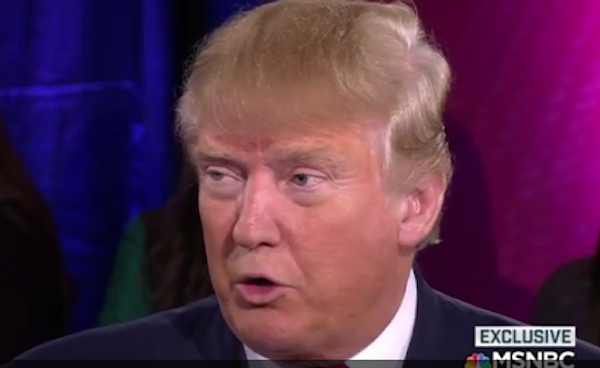 Asked by Joe Scarborough at the MSNBC town hall why he kept on attacking his rivals, Trump said, “I hit Jeb because he’s easy to hit, to be honest.” Whether Trump was being completely forthright or not, his remark was revealing. The GOP primary has been a return to high school, with Trump as the jolly bully and Bush as the unfortunate victim who keeps getting shoved in the locker.

Aside from taking glee in pushing around Jeb, Trump was his typical bullying self, confidently (and it must be said, accurately) explicating the failures of George W. Bush on 9/11 and the Iraq War. Trump was on shakier ground when asked about possible foreign policy advisers. Like Melville’s Bartleby, he said he’d prefer not to answer right now, although promised that in a week’s time he’d have a spectacular foreign policy team. Trump’s brazenness is another outgrowth of his arrogance.