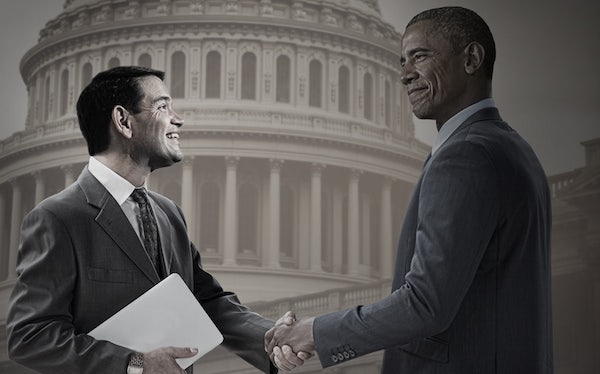 The photo appears as a background image on TheRealRubioRecord.com, a microsite created by the Cruz campaign to try and paint Rubio as a bad, bad conservative willing to work with Democrats.

As CNN pointed out this afternoon, the photo was ‘shopped using a generic stock image from Getty and cutouts of Rubio and Obama’s faces. Cruz’s campaign managed to at least get some details right—Obama’s head was placed atop a black man’s body, which is a bigger victory than you might think—but their heads are weirdly proportioned.

In just the last three weeks the Cruz campaign has concocted fake endorsements, fake government documents, and fake breaking news about a rival. So it’s no surprise that Team Rubio has seized on the image as further evidence that Cruz is pretty shady.