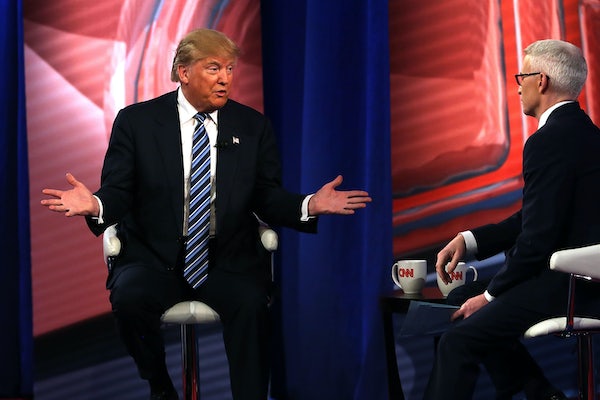 Republicans are thrilled Donald Trump was also once wrong about Iraq.

Trump has miraculously turned the claim that he was opposed from the outset to invading Iraq into an asset in a Republican primary. Now along comes Buzzfeed with audio of Trump on Howard Stern in September 2002 drawing that claim into doubt.

Stern: “Are you for invading Iraq?”

Trump (apprehensively): “Yeah I guess so. I wish the first time it was done correctly.”

Confronted with this by Anderson Cooper, Trump argued that in 2002 he was a businessman who rarely addressed political questions. He may have offered qualified support when first asked, but by the time the war began in 2003 he’d turned against it and became even more opposed in subsequent months.

One of Trump’s most mysterious political skills is his ability to lie brazenly and suffer no political repercussions. Months on, the media and his opponents are deeply invested in making one of his lies stick. But it won’t be this one. Trump’s recollection, even if still exaggerated, will ring credible because it tracks the way the public’s view of the Iraq War changed over time. Trump clearly wants more points for prescience than he deserves, but he’s ultimately arguing that he reached the correct position on Iraq a good decade before any of his opponents. I think that’ll carry more weight with potential supporters than the implication that he claimed to be opposed to the Iraq War in 2002, when it was really more like 2004. And so it should.