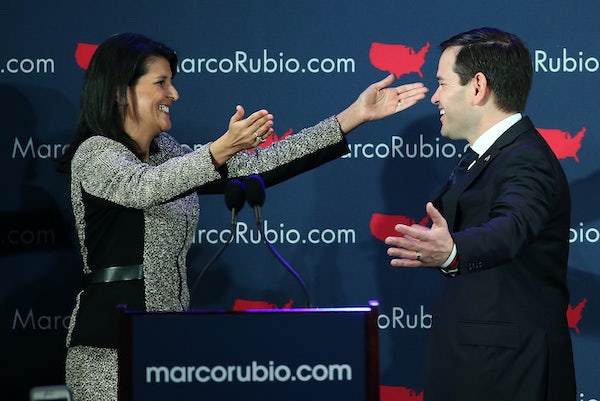 Marco Rubio has somehow given two victory speeches this election cycle, despite not having won an election.

Rubio declared victory at Saturday’s South Carolina primary, despite losing to Donald Trump by more than ten percentage points. You’d never have gotten that from Rubio’s speech. He spent most of his time talking about how he was the heir of the Reagan Revolution and the leader of the 21st century conservative movement.

It was the kind of speech Rubio could have given after Mitt Romney’s spectacular defeat in the last presidential election. In 2012, when conservatives and Republicans were wringing their hands about what to do, many looked at changing demographics and decided that, in the next election cycle, the Republican Party would have to reach out to a more diverse electorate.

Rubio’s speech tonight did that. Standing beside Nikki Haley, the Indian-American governor of South Carolina, and Tim Scott, the African-American junior senator from that state, Rubio talked about diversity. He paid specific attention to Haley, the “daughter of immigrants” who “faced the sting of prejudice,” and delved into his own life story, as the son of two Cuban immigrants, on multiple occasions.

It was a speech for a mythical 2016 election that hasn’t happened yet. Instead, this election has been all about Donald Trump and his particular brand of nativism. Marco Rubio barely acknowledged him tonight.