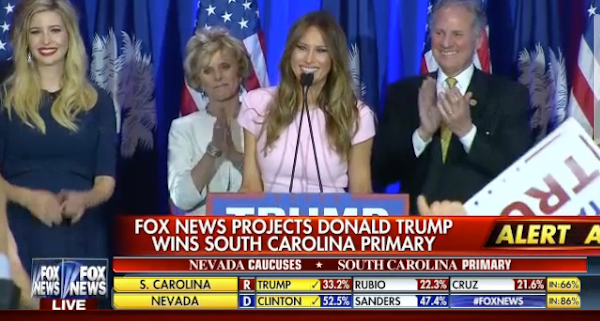 Donald Trump is so confident he let Melania speak in South Carolina tonight.

Trump has mostly kept his wife on the sidelines during the Republican primary. He’s one of the first candidates in decades who doesn’t really talk about his spouse as his “secret weapon,” which makes sense, given that he’s been campaigning against immigrants, and even attacked Jeb Bush for speaking Spanish. Melania is Slovenian. The New York Times called her “the Silent Partner.”

But after winning his second primary, Trump sounded, incredibly, even more confident than usual. He was amped. And he pulled Melania to the lectern. “Just want to say: an amazing place, South Carolina,” Melania said with a thick accent. “Congratulation to my husband. He was working hard.” She said they would go on to Nevada, and, “He will be the best president.” It was a window into the Trumps’ marriage. The crowd cheered loudly.

After he retook the lectern, Trump gave part of his usual stump speech, even pitching himself as a kind of technocrat on the military—he promised people who knew best would determine what equipment to buy. But he also seemed satisfied he’d made the right decision to run. Trump said of the presidential campaign, “It’s mean, it’s nasty, it’s vicious, it’s beautiful. When you win, it’s beautiful.”