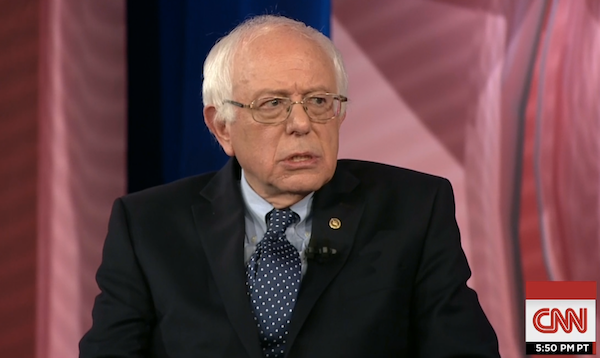 Sanders: Republicans are making “a racist effort to try and delegitimize” Obama.

During Tuesday night’s Democratic town hall, an audience member asked Bernie Sanders about congressional Republicans’ efforts to stop President Barack Obama from fulfilling his constitutional responsibility to nominate a Supreme Court justice to fill the late Antonin Scalia’s seat by suggesting that it is part of a larger campaign to undermine Obama’s presidency.

“What you are seeing today in this Supreme Court situation is nothing more than the continuous and unprecedented obstructionism that President Obama has gone though,” he said to applause from the crowd. “And this is on top of the birther issue—which we heard from Donald Trump and others—a racist effort to try and delegitimize the president of the United States.”

Sanders has been criticized by some Democrats for being too critical of Obama at times, so his forceful defense of his administration could be part of an effort to win back voters who were turned off by Sanders criticism of Obama.