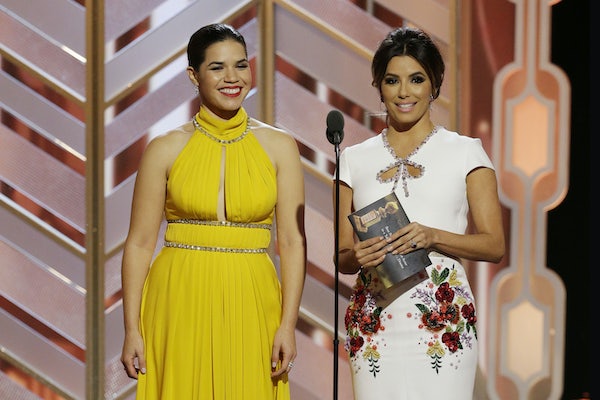 Eva Longoria, America Ferrara, and Jimmy Smits were all told by casting directors that they needed “Latino accents.”

The New York Times’s Melanie Ryzik interviewed 27 Hollywood actors, writers, directors, and producers for a piece on “What It’s Really Like to Work in Hollywood (If You’re Not a Straight White Man).” In it, America Ferrara describes being asked by a casting director at her first audition, “Can you do it again but sound more Latino? ... Do it in English but just sound more Latino.”

Smits and Longoria both related similar stories of being told they weren’t Latin enough for the roles they were auditioning for. “Some white male casting director was dictating what it meant to be Latin,” Longoria says. “He decided I needed an accent. He decided I should [have] darker-colored skin.” Ken Jeong also describes pressure to use an accent or broken English.

You should really read the entire piece at the Times, if only to get to the jaw-dropping moment when The Wire’s Wendell Pierce describes being told by a major studio in 1985, “I couldn’t put you in a Shakespeare movie, because they didn’t have black people then.”