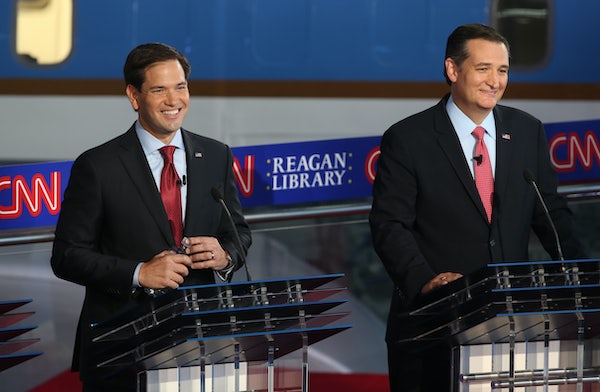 At tonight’s GOP debate, expect Trump to be a bystander to some hot Rubio-on-Cruz action.

Politico reports that, according to “those briefed on his strategy,” Rubio plans to concentrate his fire on Cruz, keeping to his plan of whittling the race to a two-man affair between him and the frontrunner Trump.

That’s all well and good in theory, but in the meantime Trump is doing so much winning. The thinking on the Republican side appears to be that the GOP has until March 15—which features winner-take-all contests in Ohio and Florida—to coalesce around a Trump alternative. But that presumes a lot of things that may not come to pass: Carson and Kasich dropping out, a decisive winner in the Rubio-Cruz fight for second place, and a relatively even distribution of delegates on Super Tuesday on March 1.

At any rate, it may be too late to cut Trump down to size. The Republican Party spent the fall and the winter letting him campaign virtually unmolested. Don’t expect Rubio to do anything about that.