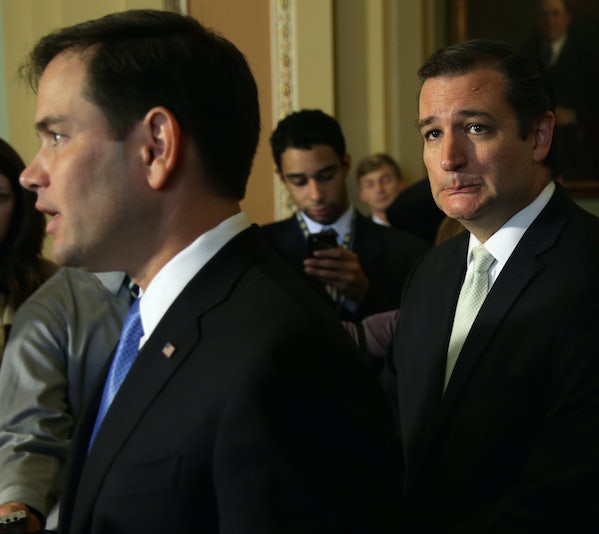 Can you imagine two worse people to stop Donald Trump than Ted Cruz and Marco Rubio?

The GOP establishment and pundit class are in agreement. Trump has gotten this far in the election because he has not been truly confronted, and it is time for Cruz and Rubio to step up their attacks on the race’s frontrunner.

This is a good idea in theory. Despite leading in the polls for months, Trump has had a relatively easy time, and his opponents have attacked their fellow stragglers more than the man who has won three of four primary contests. Infighting made some strategic sense—Cruz and Rubio both know that they can’t win the nomination while the other stays in the race—but time is running out. If Republicans want to stop Trump, there’s no time like tonight’s GOP debate.

The problem is that Rubio and Cruz (to say nothing of Ben Carson and John Kasich) are phenomenally ill-equipped for this task. Rubio couldn’t take lesser Tri-state tough guy Chris Christie, and sweats, stammers, and malfunctions when forced to improvise under pressure. Cruz, meanwhile, got owned by Trump once, during the whole “New York values” flap, and his idea of an attack is referencing 15-year-old films like Austin Powers: Goldmember. At best, he struggles with social skills.

The Republican Party’s last, best hopes haven’t outsmarted, out-toughed, or out-maneuvered Trump all campaign. Why should tonight be any different?