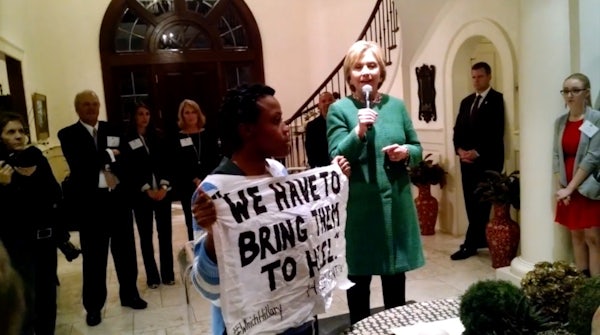 Hillary Clinton regrets using the term “superpredator” in a speech 20 years ago.

In 1996, she made an appearance at a small college in New Hampshire and defended the crime bill her husband had signed into law two years prior. In her remarks, she talked about the growing problem in some communities with rising rates of crime.

“They are often the kinds of kids that are called ‘superpredators.’ No conscience, no empathy,” she said at the time. “We can talk about why they ended up that way, but first we have to bring them to heel.”

Fast forward two decades to Wednesday night, when a young African-American protester unfurled a banner at a Clinton event reading “We have to bring them to heel,” and then confronted Clinton for referring to young black youth as “superpredators.”

The whole encounter lasted a few seconds and Clinton didn’t have a chance to respond to the protester directly before she was escorted out by security, but in an interview with the Washington Post today, she followed up by saying she regretted using that term.

“In that speech, I was talking about the impact violent crime and vicious drug cartels were having on communities across the country and the particular danger they posed to children and families,” she said. “Looking back, I shouldn’t have used those words, and I wouldn’t use them today.”