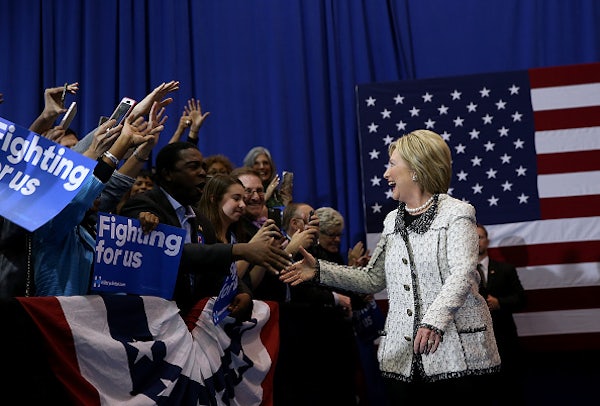 Hillary is positioning herself as the anti-Trump, promising to “tear down barriers” instead of building a wall.

After her huge victory over Bernie Sanders in the South Carolina primary on Saturday night, Clinton declared, “We don’t ever need make America great again—America is already great!” It was just this week that the whole world woke up to the terrifying realization that not only is Donald Trump likely to win the Republican nomination for president, he could actually get elected. But Clinton appeared to welcome a matchup against Trump, pitching herself has his opposite, all her empathy and kindness against his macho swagger.

Almost every line of Clinton’s speech seemed meant to show she’s the counterpoint to everything Trump is known for. Trump is rude and cruel, and Clinton promised to be nice: “It’s a little unusual for a candidate for president to say we need more love and kindness in America, and I’m telling you from the bottom of my heart, we do.” She called for people to have “kindness in our hearts and respect for each other even when we disagree.”

Trump is pessimistic, and Clinton said she was optimistic: “We have so much to look forward to. There is no doubt in my mind that America’s best years are ahead of us.” Trump runs on white male resentment, and Clinton promised to elevate women and minorities, by helping non-white-male entrepreneurs, punishing exploitive employers, and going after corporations that dodge taxes. “We do need to make America whole again,” she said. “Instead of building walls we need to be tearing down barriers.”

Unlike in 2008, this election Clinton decided to make being a woman at the center of her campaign. This speech pitched that as more than empty symbolism, offering qualities associated with being female—being nurturing, caring for the least fortunate—as the basis for actual policy differences with Donald Trump.