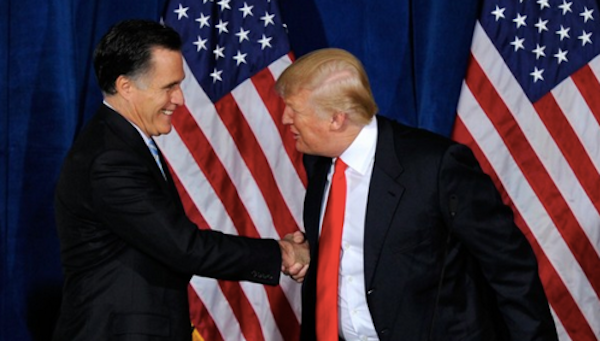 For Mitt Romney and the GOP, Trump’s KKK controversy is the last straw.

The hotelier is embroiled in a scandal over whether he is willing to disavow the Ku Klux Klan, whose former grand wizard, David Duke, told supporters recently that a vote against Trump was “treason to your heritage.”

Asked to renounce the white supremacist group on CNN’s State of the Union Sunday, Trump told Jake Tapper, “I don’t know anything about what you’re even talking about with white supremacy or white supremacists.” Appearing on Today this morning, Trump tried to blame his comments on a “lousy earpiece.”

Romney took to Twitter to call the media mogul out:

Romney and Trump have been exchanging barbs on Twitter since last week. But the incident is also telling. It takes only the most blatantly objectionable associations with the KKK for the Republican establishment to take Trump to task for racism. They didn’t mind when Romney sought Trump’s endorsement in 2012, after Trump emerged as the leading voice of the birther movement.