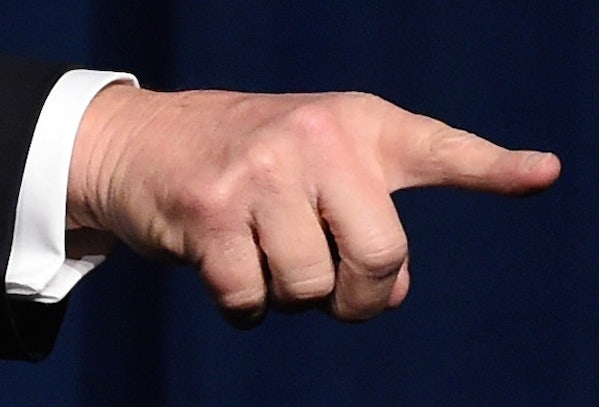 Donald Trump is trying to pretend that he isn’t super insecure about his tiny fingers, which resemble cocktail weenies.

Over the last week, Marco Rubio has repeatedly hit Trump for having small hands. (He means “penis.”) On Tuesday, while speaking at a rally in Columbus, Ohio, Trump finally addressed the pressing question of his hands. “I’ve never heard that one before,” Trump told the crowd. “I’ve always been told I have beautiful hands.”

But Trump has absolutely heard that one before—he’s been hearing it for decades, in fact. Spy magazine turned making fun of Trump’s stubby fingers into a sport in the 1980s. Editor Graydon Carter hit a nerve with Trump by calling him a “short-fingered vulgarian” in February of 1988, and the magazine used the insult repeatedly—Spy referred to Trump as a “short-fingered vulgarian” eleven times in the ensuing eight years. And while Trump can pretend all he wants that he’s never heard anyone insult his beautiful, beautiful hands, Carter tells a different story. In an editor’s note published in Vanity Fair, Carter wrote that Trump still isn’t over it:

To this day, I receive the occasional envelope from Trump. There is always a photo of him — generally a tear sheet from a magazine. On all of them he has circled his hand in gold Sharpie in a valiant effort to highlight the length of his fingers. I almost feel sorry for the poor fellow because, to me, the fingers still look abnormally stubby. The most recent offering arrived earlier this year, before his decision to go after the Republican presidential nomination. Like the other packages, this one included a circled hand and the words, also written in gold Sharpie: “See, not so short!” I sent the picture back by return mail with a note attached, saying, “Actually, quite short.” Which I can only assume gave him fits.