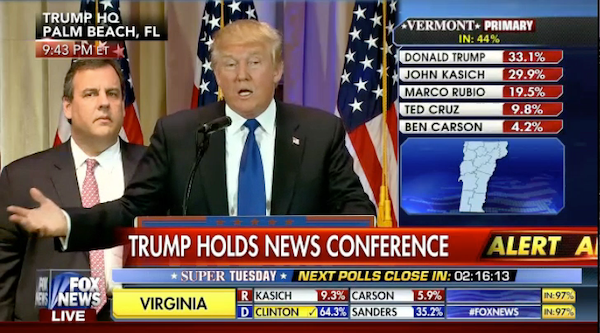 Donald Trump promised to grow the Republican Party, and the scary thing is he’s already doing it.

In his Super Tuesday victory press conference, Trump bragged about winning, as usual, but he also bragged he’d won among people who didn’t usually vote Republican. “We’re going to be a much bigger party,” Trump said. “Our party is expanding.” It would be “more inclusive” and “more unified.”

There’s something to that, if you have a very particular definition of “inclusive.” A RAND survey finds that among Republicans likely to vote, those who feel that “people like me don’t have any say about what the government does” are 86.5 percent more likely to prefer Trump. In Massachusetts, which Trump won on Tuesday night, 20,000 Democrats quit their party this year; the Democratic secretary of state credited “the Trump phenomenon.” Voter turnout has surged in the primaries on the Republican side. That doesn’t necessarily mean Trump will win the general election—the nativism that bring more white voters to the polls will likely also get Democrats to the polls to vote against him.

In his victory speech, Trump implied his success was not solely because voters want an outsider, but also because he offers a different set of policies. “I’m a conservative, but I’m a common sense conservative.” He said Planned Parenthood did some good work. “I’m going to be really good for women. I’m going to be for women’s health issues.” He almost quoted another Republican who campaigned on a mix of more moderate policies and macho swagger: “I’m a unifier.”