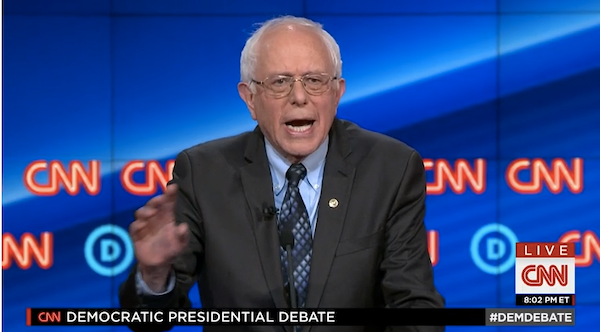 One of the more effective lines Hillary Clinton has been using against Sanders is that he’s a “single issue candidate”—the implication being that Sanders’s focus on economic inequality causes him to ignore other issues like foreign policy, racism, sexism, and homophobia. Previously, Sanders responded to this accusation with denial, telling Jake Tapper on CNN earlier this month, “I haven’t the vaguest idea of what she is talking about.”

Tonight, Sanders took a different tack: He said Clinton is right. “My issue is trying to rebuild a disappearing middle class,” he said. “That’s my one issue.” This is a smart move. One of Sanders’s defining traits as a politician is how on-message he is. He even used Flint’s water crisis to take jabs at Wall Street. Since there is a sizable chunk of the Democratic electorate, perhaps even a majority, that is equally concerned about economics, it makes sense for Sanders to turn an insult into a badge of honor.