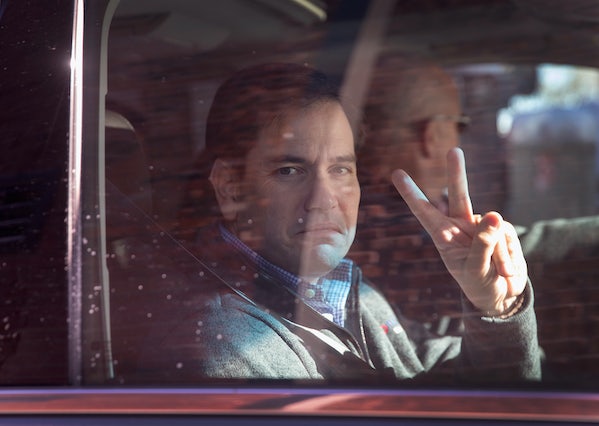 Marco Rubio has a shot in Florida, if he can survive a brutal week.

A poll from Monmouth University suggests that Rubio has significantly cut into Donald Trump’s lead in the state—Trump was previously leading by nearly 20 points, and is now ahead by only eight—and that the Florida senator is winning early voters by a two-to-one margin.

This is all very good news for Rubio, but it comes, as The Washington Post’s Philip Bump points out, with one significant grain of salt: “Rubio had been getting a surge of late deciders in early contests, but it seems as though his support isn’t quite as firm as Trump’s. Two-thirds of Trump’s supporters say they won’t change their minds, versus 55 percent of Rubio backers who say the same thing.”

That lack of firm support could be a big deal. Rubio is set to get shellacked twice this week: First on Tuesday, where he’ll likely finish fourth in the Michigan primary, and then again on Thursday, at a Republican debate where all three remaining candidates will likely repeatedly call on him to leave the race. Rubio’s lead in early voting and his momentum in Florida may serve as a bulwark, but the “Rubio is finished” narrative is likely to gain steam as the week goes on. Early voting should bolster Rubio’s flailing campaign, but it may not save it.