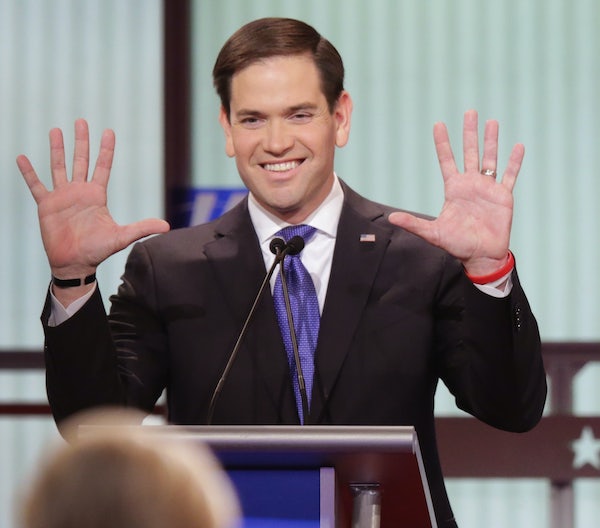 Marco Rubio is almost out of options.

At the last two Republican debates, Rubio gleefully jumped in the gutter with Donald Trump, suggesting that his small hands mean that he has a small penis, alongside other Trump-esque barbs. It hasn’t worked. Although attacks on Trump appear to have done some damage to his credibility with voters, Rubio himself hasn’t benefited. He’s only won Puerto Rico since ramping up his rhetoric.

The taunts seem to have cost Rubio at the polls—people like it when Trump does it, but not when Little Marco imitates him. Rubio needs to be surgical and precise in his criticisms of Trump, but he hasn’t settled on a line of attack. He did, however, see some success attacking Trump’s more outlandish schemes, like Trump University.

One possibility for Rubio tonight would be to withdraw the pledge he made at the last debate to support the eventual Republican nominee. Making the pledge was a huge tactical error for Rubio that undercut all the attacks he made on Trump. Desperate times call for desperate measures: Flip-flopping on the pledge may be the only option left on the table for Rubio. And it still probably won’t work.