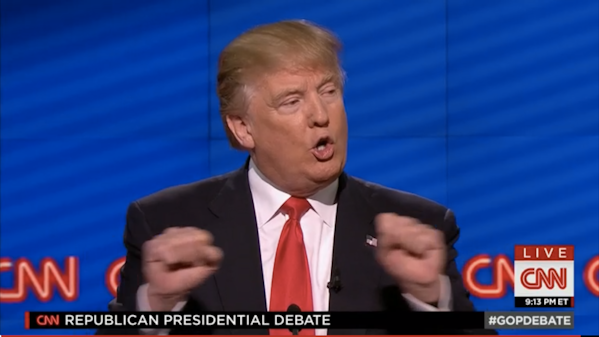 Donald Trump claims to be the monster who can destroy the other monsters.

In previous debates, Trump’s rivals have thought that they could score a hit against him on immigration by noting that he has hired foreign workers. But in Thursday’s Republican debate on CNN, Trump came up with an effective response, saying in effect: Yes, I’ve used the HIB visa program to hire workers at lower wages to replace Americans, but that’s because I’m a businessman exploiting the law to my advantage—and since I know how the system can be exploited, I’m the one who can end it.

Trump is running a campaign on the adage, “It takes a thief to catch a thief.” His claims about visa exploitation parallel his assertion that as a businessman he’s used to buying politicians to get what he wants. And it overlaps with his claim (factually false but rhetorically powerful) that he is self-financing his campaign, so not beholden to big money. The appeal of these arguments shouldn’t be underestimated. Trump has found a way to turn his widely criticized flaws to his advantage.