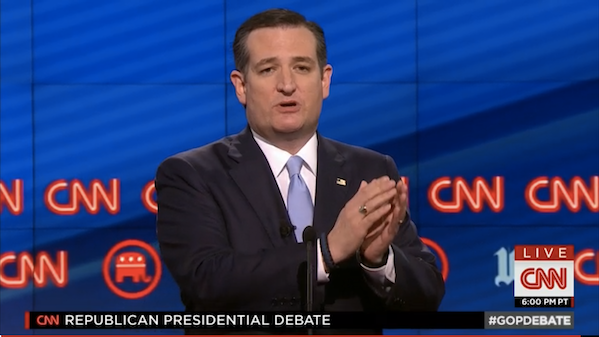 Ted Cruz mangled the history of the Great Depression.

Fielding a question about tariffs at Thursday’s Republican debate, the Texas senator said the Great Depression was caused by the protectionist Smoot-Hawley Tariff Act of 1930. The problem with this claim can be seen by basic chronology. The Great Depression started in 1929 (and the economy had been fragile even earlier). So at worst Smoot-Hawley can be accused of exacerbating the Depression but not causing it.

More importantly, the actual causes of the Depression are pertinent to the Republican debate in ways that make Cruz and the other candidates look bad. One major cause was the nationalist foreign policy that insisted that the European countries pay back their war debt, even if it damaged international trade. That doesn’t make the style of America First trade policies advocated by Cruz and the rest look very appealing. Another cause was the inflexibility of monetary policy due to the gold standard. And of course one of Cruz’s signature policies, an idea which almost all mainstream economists regard with horror, is returning to the gold standard.

Ted Cruz is a movie fan. If he wanted to learn about the the causes of the Great Depression, he should rent Ferris Bueller’s Day Off, which has a better lecture on this than what he offered.