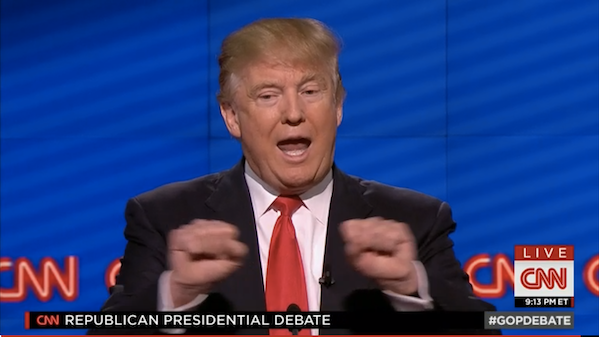 Donald Trump, who brags he said “don’t do Iraq,” says he wants a quick ground war against ISIS.

How many troops would we need on the ground? “I would listen to the generals, but I am hearing numbers of 20-30,000,” Trump said in the CNN debate on Thursday night. He followed John Kasich saying we need to show “shock and awe” in the region that was destabilized by shock and awe only 13 years ago.

Trump has been campaigning on his foreign policy wisdom by claiming he opposed the Iraq war in 2003, even though there’s no public proof of it. “I said it loud and clear, ‘You’ll destabilize the Middle East,’” Trump said February 13. As FactCheck.org notes, there’s no evidence he said that before the invasion.

Trump seems to have figured out that supporting the Iraq war without studying the details of why it went so wrong. The Army wanted to invade with 400,000 troops in order to stabilize the nation after toppling Saddam Hussein. As The Atlantic’s James Fallows has explained, then-Defense Secretary Donald Rumsfeld wanted a light, agile fighting force of about 75,000. The U.S. went in with 200,000 troops. It wasn’t enough to maintain stability. In 2007, President Bush sent a surge of 20,000 troops to Anbar Province. We saw the “Sunni Awakening.” We left. Iraq fell apart. In May of 2015, Iraqi officials said ISIS controlled 80 percent of Anbar.