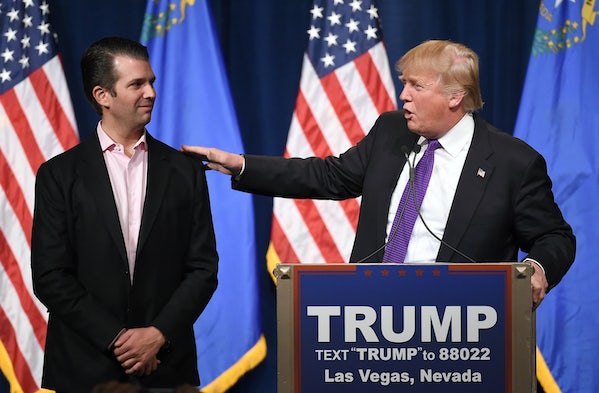 The Trump family tweets exuberantly but not always wisely. This morning, Donald Trump Jr. retweeted Vox Day, who claimed that a widely circulated photo of a Trump supporter giving the Nazi salute was actually a Bernie Sanders agent.

Vox Day’s claim is false but that is the least of the problems with Trump’s retweet. Vox Day is a pseudonym for science fiction writer Theodore Beale, who has a history of racist, sexist, and homophobic hate speech. Rationalwiki.org has compiled a mini-anthology of Beale’s greatest hits, which is worth examining.

On inter-racial dating: “There is no reason a white father should hesitate to tell his daughters what sort of young men are approved and what sort are not, regardless of what his criteria might be. … If you’re not okay with it, then it is your duty as her father to tell her that you’re not okay with it, even if her reaction is to denounce you as a racist, sexist, transphobic bigot while filming herself being urinated on by an African rapper with a sub-80 IQ.”

On gayness: “Homosexuality is a birth defect from every relevant secular, material, and sociological perspective...[we must] help them achieve sexual normality.”

On the education of women: “Ironically, in light of the strong correlation between female education and demographic decline, a purely empirical perspective on Malala Yousafzai, the poster girl for global female education, may indicate that the Taliban’s attempt to silence her was perfectly rational and scientifically justifiable.”