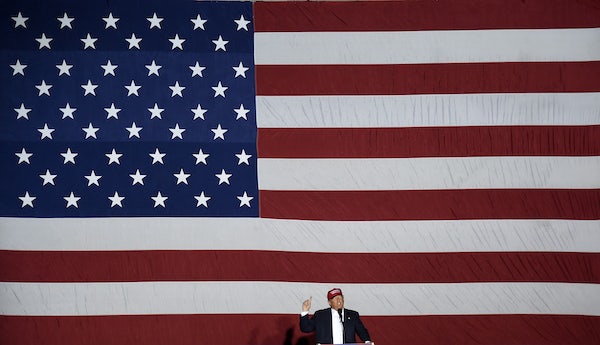 What to do about Donald Trump? Two options have emerged.

Tomorrow’s contests in Florida, Ohio, Illinois, Missouri, and North Carolina likely represent the Republican Party’s last, best chance to halt his momentum. It’s altogether possible that he could sweep four of the contests (North Carolina’s primary is the only one that “will truly award its delegates on a proportional basis,” according to FiveThirtyEight), at which point Trump would have a very clear path to the nomination.

The question is what the GOP does then. Ross Douthat this weekend endorsed the brokered convention approach, arguing that the Trump’s campaign is essentially a third-party bid being conducted within the party apparatus. Douthat says that to save itself, the GOP must expel Trump (at the risk of losing his followers) from the party.

Over at Slate, Reihan Salam says it’s the GOP that must become the third party. Anti-Trump Republicans, he argues, should unite under a Mitt Romney banner: “He would be a formidable candidate if he chose to join the campaign, and he would give anti-Trump conservatives a reason to fight this fall.”

Douthat appears to have accepted that the GOP has basically lost the general election. Salam believes there’s a “slim chance” Romney could win. Either way, it looks like the Republican Party is heading toward a crack-up.