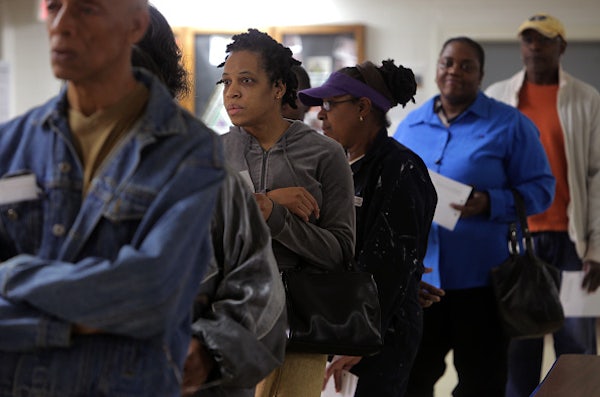 On the eve of Super Super Tuesday, some 218,000 state residents do not have any of the valid forms of government identification needed to vote, as called for by a 2013 ID standard being implemented for the first time this election cycle. A last-minute corollary to the ID law, added in an apparent attempt to improve its chances of surviving a pending federal lawsuit, exempts voters with “reasonable impediments” to ID access. Still, their ballots will be counted as provisional and could be stricken at a later date.

Ari Berman, author of Give Us the Ballot, has an article out in The Nation detailing the ordeal of Ethelene Douglas, an 85-year-old black woman who over two years made four trips to the DMV and two trips to South Carolina, and was forced to purchase $86 in public documents just to obtain a right she had been exercising with regularity ever since registering in 1964—the year before the Voting Rights Act passed.

Thanks to the Supreme Court—and, in particular, the Towering Legal Figure that was Antonin Scalia—the VRA now stands gutted. In its place we have voter identification and a panoply of other restrictions whose stated purpose is to prevent a problem—voter fraud—that doesn’t seem to exist and whose only discernible purpose is to return the country to a time when it was legal to exclude people like Ethelene Douglas from participating in democracy.