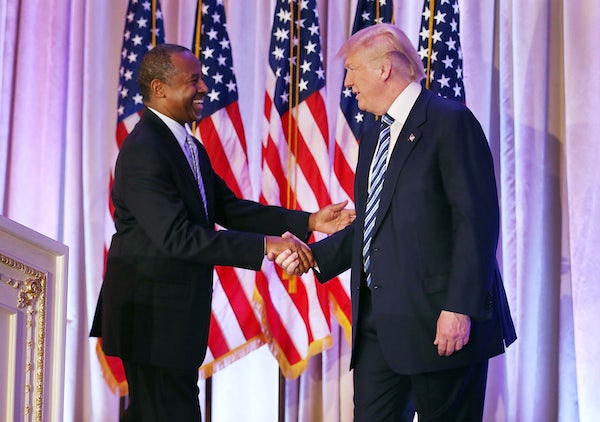 Ben Carson says Trump offered him a role in his administration, which may be illegal.

While it’s been widely assumed that Trump made such offers to Carson and others in exchange for their endorsement and liberty, Carson wasn’t supposed to blab about it. ThinkProgress caught him doing just that to NewsMaxTV. He kept telling his interviewer Steve Malzberg that a President Trump would “surround himself with very good people,” and when asked if one of those people would be Ben Carson, he replied, “I will be doing things as well.” When asked if that would be a position in the administration, he said, “Certainly in an advisory capacity.” When asked if this had been discussed with Trump, Carson said, “Yes.” When asked if it was a cabinet position, he backtracked a bit, saying, “All of this is still very liquid.”

As ThinkProgress noted: “Federal law expressly prohibits candidates from directly or indirectly promising ‘the appointment of any person to any public or private position or employment, for the purpose of procuring support in his candidacy.’” Looks like the incoming Trump administration is off to an ethically pristine start!