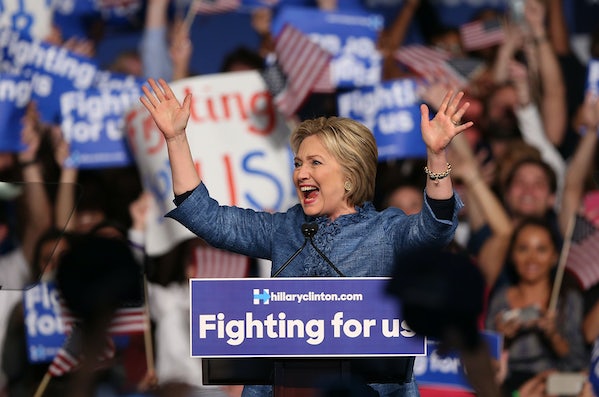 Tonight Hillary Clinton tried to pivot to the general election for the 10th time.

OK, I’m not exactly counting, but Clinton has tried to do this over and over: In the fall, when she was leading Sanders by double-digits, after winning big in South Carolina, after Super Tuesday, and again tonight, after big and narratively important wins in Ohio and Florida.

Clinton did acknowledge Sanders—joyously and briefly, at the start of her speech—but he was very much an after thought. Instead, her triumphant victory speech tonight was all about one man: Donald Trump.

“Our commander-in-chief has to be able defend our country, not embarrass it,” she said to rapturous applause. The next president, Clinton said, cannot spend their term “rounding up 12 million immigrants,” “banning Muslims” and “embracing torture.” Then she went in for the kill: “That doesn’t make him strong, it makes him wrong.... We should be breaking down barriers not building walls. ... To be great, we can’t be small. ... And this isn’t just about Donald Trump. All of us have to do our part.” The remainder of the speech was devoted to Clinton characterizing herself as the anti-Trump: Mainly that she is someone who brings people together and represents all Americans

Clinton was absolutely ecstatic and, despite a hoarse voice, her energy carried her speech. And Clinton has every right to be excited: With wins in Ohio, Florida, and North Carolina, this may very well be the biggest night of the campaign so far for her.