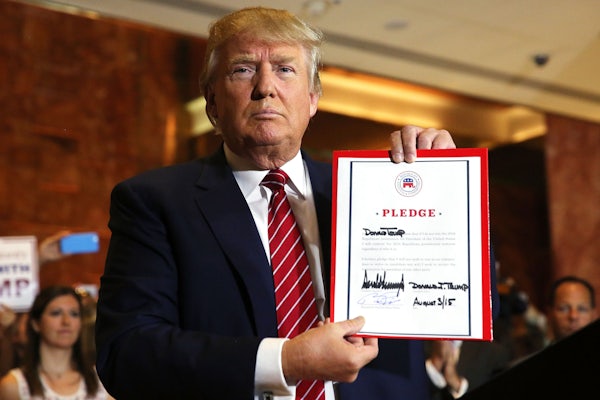 Some Republicans are ready to give up on democracy to stop Donald Trump.

With it becoming ever more likely that Trump will be the Republican nominee, his opponents in the Republican Party are openly arguing for a brokered convention to stop him. Writing in National Review, David Harsanyi lays out the rationale for “stealing” (his words) the nomination if Trump wins a plurality of the delegates:

Voters don’t decide the nominations; delegates do—preferably in smoke-filled rooms where rational decisions about the future of a party can be hashed out. The Republican Party is not a direct democracy. It crafts its own rules, and it can change them.

On a purely factual basis, Harsanyi is right: The Republican Party isn’t a direct democracy (nor, with its super-delegate system, is the Democratic Party). Yet a convention coup would raise issues of democratic legitimacy. After all, why did the party go through the charade of a primary, costing tens of millions of dollars, only to thwart the wishes of the biggest block of voters? And wouldn’t those voters have a right to be angry? “You’d have riots,” Trump has said, and he’s almost certainly right.

Like all demagogues, Trump poses a problem for anyone who believes in democracy. Fortunately, Harsanyi has no such scruples, since he’s the author of The People Have Spoken (and They Are Wrong): The Case Against Democracy. But for those of us who still believe in popular sovereignty, Trump will have to be defeated at the ballot box, not in smoke-filled rooms.