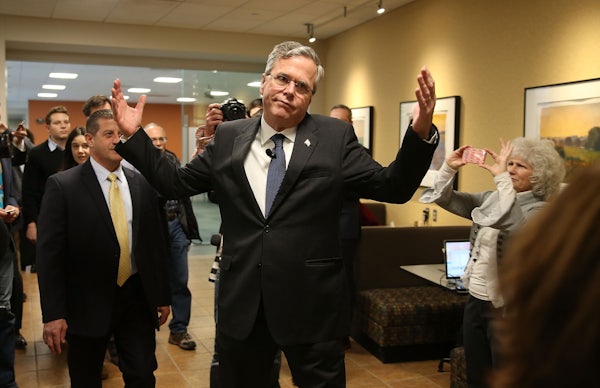 “What the f--k were we thinking?” asks the head of Jeb’s super PAC.

The quote is just one of several amusing tidbits from Matt Labash’s profile in The Weekly Standard of Mike Murphy and the last days of Right to Rise, which infamously squandered an enormous war chest in its futile attempt to lift its candidate to the Republican nomination. Amidst an office strewn with smashed Trump piñatas, whiskey bottles, and a primary countdown clock set to zero stands Murphy, a veteran operative who has just suffered the worst defeat of his career and has something to say about it.

There are pictures of Jeb, of course, beaming beatifically while surrounded by smiling multicultural children. The Department of Ungentlemanly Warfare has posted photos they’ve dug up of other candidates in compromising positions, such as Chris Christie inhaling ice cream while looking like he’s storing four bags of doughnuts under his shirt. Murphy has a special contempt for Christie these days, since Christie broke early for Donald Trump, becoming his Franz von Papen, the former Weimar chancellor who thought Hitler could be civilized once in office: “They made him ambassador to Turkey, next thing you know, he’s in Nuremberg.”

Read the whole profile at The Weekly Standard.