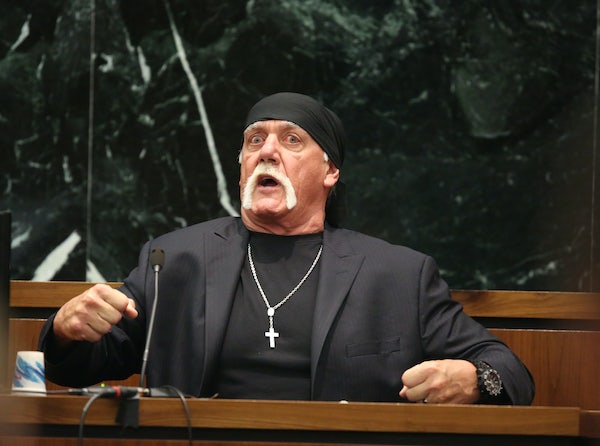 Donald Trump thinks the Gawker verdict means he “might not have to” change libel laws if elected president.

In what can only be considered a giant, editorial subtweet of The New York Times, The Washington Post published its editorial board’s conversation with Trump in full on Monday afternoon. The entire conversation, which touches on Trump’s foreign policy, the violence at his campaign events, and immigration policy, is worth a read, but in light of the recent verdict in the Gawker-Hulk Hogan trial this bit stands out:

RYAN: Mr. Trump, you’ve mentioned many times during the campaign, in fact including this morning, instances you feel where the press has been biased or unfair or outright false in their reporting, and you’ve mentioned that you want to “open up” the libel laws. You’ve said that several times.

TRUMP: I might not have to, based on Gawker. Right?

TRUMP: What I would do, what I would do is I’d – well right now the libel laws, I mean I must tell you that the Hulk Hogan thing was a tremendous shock to me because – not only the amount and the fact that he had the victory — because for the most part I think libel laws almost don’t exist in this country, you know, based on, based on everything I’ve seen and watched and everything else...

Trump goes on to say that he thinks that people should sue only if the media gets something wrong and refuses to retract, which is still pretty unsettling, given that his proposed libel laws would almost certainly have a chilling effect on media.

In other Gawker-Hogan news, the jury awarded Hulk Hogan an additional $25.1 million in punitive damages on Monday afternoon for violating his privacy and posting a video of him having sex with his friend Bubba the Love Sponge Clem’s wife. Gawker owes $15 million, its founder Nick Denton owes $10 million, and AJ Daulerio, who posted the video, owes $100,000, despite the fact that Hogan’s attorneys did not recommend that the jury award damages from him.