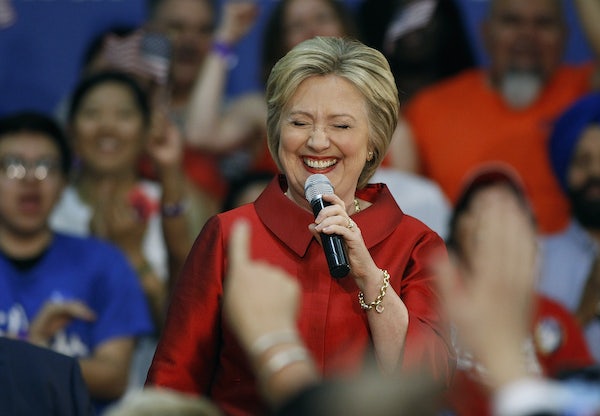 Hillary Clinton won big in Arizona, but she might not win again for three weeks.

And that shouldn’t worry her one bit.

Clinton keeps winning her way: taking the state with the most delegates by a large margin, while leaving smaller prizes for Bernie Sanders. And she won in Arizona her way—with 71 percent of precincts reporting, she is beating him 60.6 percent to 36.9 percent.

But Sanders is headed into what should be a very favorable stretch of the campaign. He could easily win the next six contests. He could take Idaho and Utah, which vote tonight, and he’s favored to win in Alaska, Hawaii, Washington, Wisconsin, and Wyoming, which go to the polls between now and April 9. That’s nearly three weeks of winning—Clinton doesn’t have a strong state until New York goes to the polls on April 19.

That may change the narrative—something Sanders desperately needs—but it won’t change the course of the election. Only Washington has a sizable number of delegates, and Clinton should do well enough in many of those states, preventing Sanders from really cutting into her lead. As long as Clinton keeps winning big in states like Arizona and Sanders keeps winning states like Idaho, the trajectory of the race won’t change.

Sanders will still influence this election: He’ll fight to keep Clinton to the left, and his share of the delegates should give him a great deal of influence over the party’s platform. But the fundamentals, when combined with the fact that the Democratic Party establishment is completely behind Clinton, mean that he has almost no chance of winning the nomination.