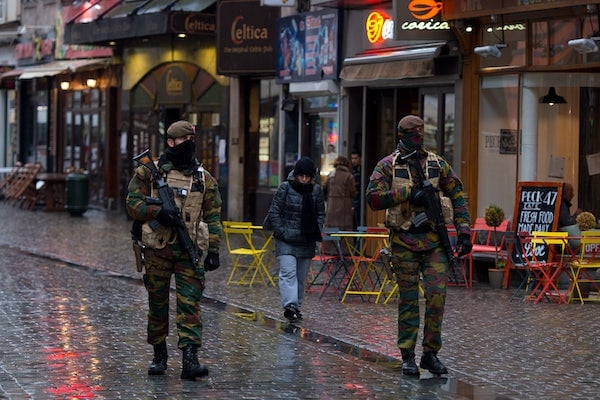 What was the European Union?

The terrorist attacks in Brussels—a city that is both the bureaucratic heart of European integration and a symbol of deep dysfunction brought on by a crisis in identity—have become the latest stress point on the union, whose ties have been frayed by an array of forces: mass immigration, anemic economic growth, and, most spectacularly, homegrown terrorism. The Washington Post’s Griff Witte reports today that the attacks could push Britain toward a so-called Brexit in a referendum this summer, and that “[a] vote to get out would galvanize anti-E.U. forces continent-wide and make it even harder for the union to govern.” Jochen Bittner, writing in The New York Times, describes the thinking of euro-skeptic countries: “Why, these countries ask, should we be forced to repeat Western Europe’s mistake: preach religious tolerance, embrace multiculturalism, and end up with hate-breeding parallel societies?” Bittner ultimately comes down on the side of the union, citing the 60 years of peace that have been the hallmark of the integration project. But this is the same rationale that has been trotted out year after year, amidst mass economic hardship, the proliferation of far-right parties, and deepening radicalization among minority communities. At this rate, it may be just a matter of time before Europeans decide this legacy is not worth the price.