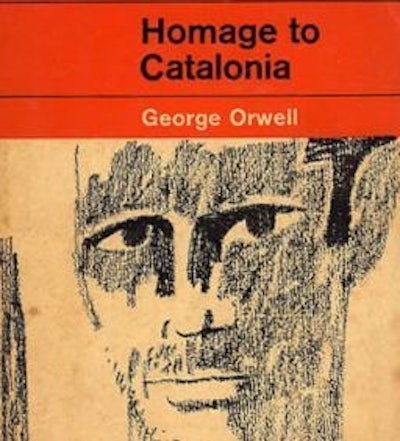 Homage to Catalonia is a better book about the Spanish Civil War than For Whom the Bell Tolls.

John McCain has written a tribute to a little-known person named Delmer Berg, under the eye-catching headline “Salute to a Communist.” The gist is that Berg, though a communist, fought against the fascists during the Spanish Civil War. He believed in a cause and didn’t give up on his comrades, and that made him a noble figure, like Robert Jordan from Hemingway’s For Whom the Bell Tolls, which McCain describes as his “favorite novel.”

In the novel, Jordan had begun to see the cause as futile. He was cynical about its leadership, and distrustful of the Soviet cadres who tried to suborn it.

But in the final scene of the book, a wounded Jordan chooses to die to save the poor Spanish souls he fought beside and for. And Jordan’s cause wasn’t a clash of ideologies any longer, but a noble sacrifice for love.

“The world is a fine place and worth the fighting for,” Jordan thinks as he waits to die, “and I hate very much to leave it.” But he did leave it. Willingly.

No offense to Berg, but this is Hemingway at his worst, in equal degrees macho and maudlin. It is a way of romanticizing war, which is especially dispiriting when the war in question is the Spanish Civil War. A more clear-eyed view of the matter can be found in Homage to Catalonia, in which George Orwell, who also fought on the side of the communists, grows increasingly disillusioned by the internecine fighting between the communist factions. When the Stalinist purges begin, he doesn’t let loyalty sway him—he gets the hell out of there and writes a book about it. His description of getting shot in the throat, a near-death experience, is not only a fine specimen of limpid prose, but a sensible retort to the Robert Jordans of this world: “The stupid mischance infuriated me. The meaninglessness of it!”