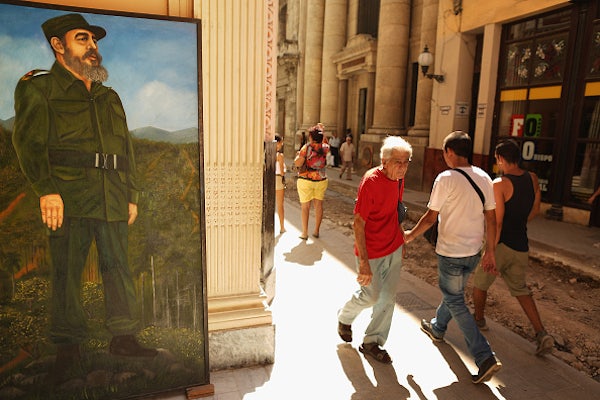 Fidel Castro is still alive, and so are the old politics of U.S.-Cuba relations.

President Obama traveled to Cuba last week to “bury the last remnant of the Cold War in the Americas,” but Fidel isn’t dead yet, which means removing “the shadow of history from our relationship” won’t be as easy as Obama might like.

In an op-ed published Monday in Granma, the Cuban Communist Party’s official newspaper, Castro unloaded on Obama in familiar terms. “We don’t need the empire to give us anything,” he wrote, running through a long list of past grievances, including the 1976 bombing of a Cuban passenger flight by a CIA-trained right-wing terrorist cell. “My modest suggestion is that [Obama] reflect [on that history] and stop trying to elaborate theories on Cuban politics.”

Last week, I wrote about how Castro’s visit to Harlem in 1960 helped shape his critique of U.S. moral hypocrisy, specifically regarding race. And you can see that discourse reflected in his op-ed, from a barb about Obama’s exclusion of indigenous peoples from the United States and Cuba’s shared colonial heritage, to the lengthy diatribe on Cuba’s effort to fight off U.S.-backed white supremacist forces in Angola.

But it’s notable that Castro’s screed came on Monday, long after Obama had left, just as the “blistering editorial” Granma ran ahead of Obama’s trip cut a wide berth around his visit. In Cuba, as in the United States, the old politics are still potent. The ongoing rapprochement between the two countries is all the more meaningful for it.