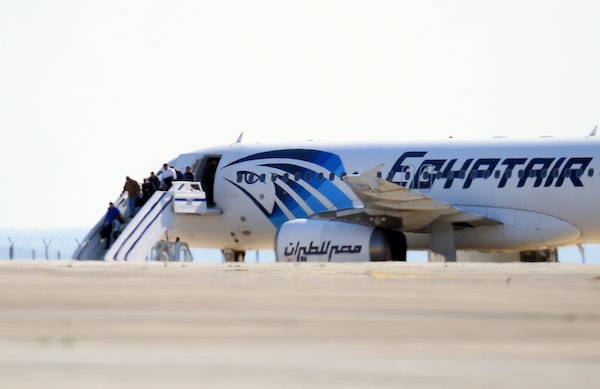 Some “idiot” hijacked an EgyptAir plane and forced it to land in Cyprus.

That, at least, is how the hijacker is being reportedly described by Egyptian officials. The suspect, claiming he was wearing an explosive belt, took control of the plane as it flew from Cairo to Alexandria. Once it landed in Cyprus, all the passengers were released, except for three passengers and four crew members, according to Bloomberg. They, too, were eventually released, and the hijacker was arrested.

It is unclear whether the hijacker’s explosives were real, and Cyprus President Nicos Anastasiades said the incident is “not something that has to do with terrorism.” When asked to comment on reports that the hijacker’s motivations may be related to a love interest, Anastasiades responded, “Always, there is a woman.”

Still, while the incident appears to be devolving into farce, the hijacking has renewed concerns about airport security in Egypt. In October, a bomb brought down a Russian plane departing from the resort town of Sharm el Sheikh.