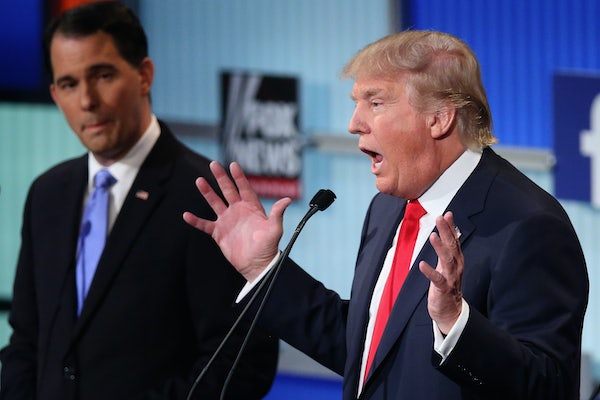 A poll released on Wednesday showed Trump trailing Ted Cruz by ten points in Wisconsin. Ten points is far from insurmountable, but another number in the Marquette poll is very, very, very bad for Trump: He has a 70 percent unfavorability rating in the state and a 22 percent favorability rating. There are not adequate words in the Political Pundit’s Dictionary to describe numbers like that. They are atrocious and they essentially suggest that Trump, who is currently polling at 30 percent in Wisconsin, has already won the vote of everyone in the state who doesn’t despise him.

If Trump were to only collect a handful of Wisconsin’s 42 delegates, it wouldn’t sink his path to the nomination, though it would make it more difficult. Even with big, winner-take-all states like New York and California to come—states, it’s worth adding, that Trump is currently leading—Trump still needs every delegate he can get his hands on to win the nomination outright.

But Wisconsin could serve as the first manifestation of a growing problem for Trump: That the wider populace, which already pretty much hated Trump, is starting to really, really hate him. Politico reported earlier this week that Trump’s national favorability numbers were tanking. That spells trouble for him, not only in his quest to lock up the Republican nomination, but in his campaign against Hillary Clinton (or Bernie Sanders), should he even get that far.