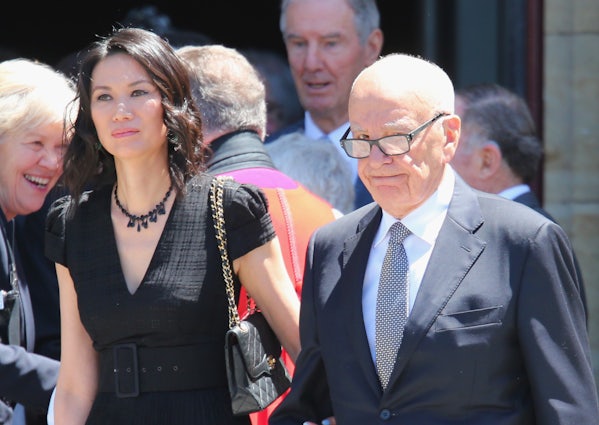 Us Weekly is reporting an “exclusive” that Deng, whose marriage to Rupert Murdoch collapsed amid rumors that she was having an affair with ex-British Prime Minister Tony Blair, is dating the Russian strongman.

Today is, it’s worth pointing out, March 31, aka the day before April Fool’s Day, and I am still not entirely convinced this is real because holy shit, what? It’s also worth pointing out that Us Weekly’s story is a bit thin, quoting an unnamed source close to Putin that the relationship is “serious” and offering as evidence that she was seen “boarding her pal Roman Abramovich’s yacht in St. Bart’s” on Monday. Abramovich is also friends with Putin, so surely they must be dating! I, for one, have only ever gotten on the yachts of people who are friends with the people I am dating. Also, holy shit, what?

But despite the possibility that this is an early April Fool’s joke (which would be the worst, because today is March 31 and this would violate the sacred trust that is April Fool’s Day), this does make a perverse amount of sense. For one, Gary Shteyngart predicted the couple back in 2013:

And it’s not hard to imagine Putin watching the video of Deng socking the absolute crap out of some guy who was trying to throw a pie at her then-man Rupert Murdoch and saying, “Yes, this is the woman for me.”

And where could Deng go after Blair and Murdoch? With Kanye West happily married, there was only one man left for her: Vladmir Putin.