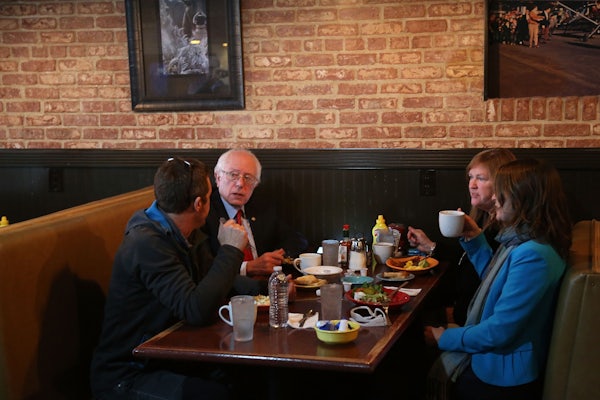 The problem with Bernie Sanders’s campaign was that he never thought he’d win.

Sanders has all the momentum in the Democratic race right now, having won five of the last six contests and being favored to win the next two, in Wisconsin and Wyoming. But Sanders, whose initial plan to wrest the nomination from Hillary Clinton was to win the first three states, got off to a slow start that his campaign still hasn’t quite recovered from.

The New York Times has a piece about Sanders’s early woes that captures a truth rarely acknowledged about Sanders’s campaign, now that he has a slightly more plausible shot at the nomination: becoming president was never the goal. Per the Times’s report:

Originally skeptical that he could beat Mrs. Clinton, and his mission in 2015 was to spread his political message about a rigged America rather than do whatever it took to win the nomination. By the time he caught fire with voters this winter and personally began to believe he could defeat Mrs. Clinton, she was already on her way to building an all but insurmountable delegate lead.

This led Sanders to be less interested in doing normal campaign stuff like going nuclear on your opponent or awkwardly talking to potential voters in the dingy diners of New Hampshire and Iowa. Of course, Sanders’s disinterest in diners is as much philosophical as anything else:

Mr. Sanders also resisted pleas to do the kind of retail-style campaigning that Iowa voters like. He wanted to do more large rallies instead, even though many Iowans like politicians winning them over face-to-face.

“Bernie would say, ‘If I’m at a diner having a cup of coffee, I don’t want candidates coming up talking to me,’ ” Mr. Devine said.