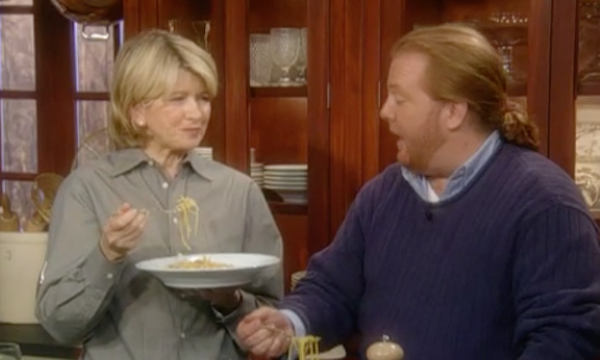 How not to make carbonara.

You begin by using farfalle, the bow-tie pasta. Then you toss it into a pot of water with raw guanciale and onions. Once your noodles and vegetables and face bacon are boiled, you incorporate creme fraiche and grated cheese and place an egg yolk on top. Also, you are French.

These are the humble ingredients of a controversy that recently dominated the front page of the Italian newspaper La Repubblica and trended on social media under the hashtag #CarbonaraGate. It all began when the French website Demotivateur posted a 46-second instructional video for making carbonara in one pot, a technique deemed to be a “horror show.” Barilla, the pasta maker whose farfalle is used in the video, distanced itself from Demotivateur, saying, “Mon Dieu! We are open to all creative interpretations of the mythical carbonara, but this goes too far. ... Désolé!”  La Repubblica’s website declares: “Sacrilegio, la carbonara è un disastro: tutti contro la ricetta francese.” I don’t speak Italian, but that sounds bad.

So how do you make carbonara? Obviously, you don’t boil the bacon. There are usually no onions and the use of cream is considered inauthentic. But everything from the type of pasta (spaghetti? bucatini?) to the type of cheese (pecorino? parmesan?) have been disputed. Mario Batali, for one, crowns his carbonara with a whole egg yolk, instead of stirring a beaten egg vigorously into the noodles to create an eggy sauce. And Martha Stewart approves.