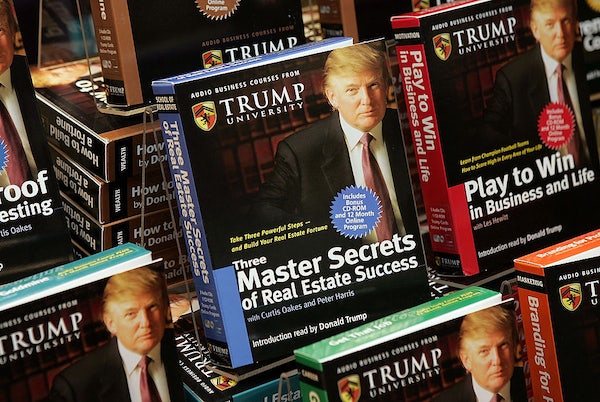 To no one’s surprise, Trump University was a con.

Nearly 400 pages of testimony and “playbooks” related to a class action lawsuit against Trump University were released on Tuesday, and they suggest that the unaccredited institution was a mix between a timeshare seminar, Amway, and the Church of Scientology.

Trump University’s playbooks encouraged instructors to aggressively sell expensive packages to prospective students, even if they couldn’t afford them. “An attendee’s problem represents a golden opportunity,” the playbook reads, in a particularly Confucian moment. Like marketing scams, instructors were encouraged to hook attendees with the suggestion that expensive Trump University courses were the keys to a better life. The ultimate goal was to get them to sign up for high-level packages, which ranged from $10,000-$35,000. While instructors were told to organize attendees by how many liquid assets they had, they were unscrupulous about who they targeted. “Money is never a reason for not enrolling in Trump University,” the playbook reads. “If they really believe in you and your product, they will find the money. You are not doing any favor by letting someone use lack of money as an excuse.”

The playbooks also encouraged instructors to suggest that students use money from their retirement funds or investment accounts to pay for courses, which led at least one former instructor to suggest that Trump University “was a fraudulent scheme ...  that preyed on the elderly and the uneducated.”