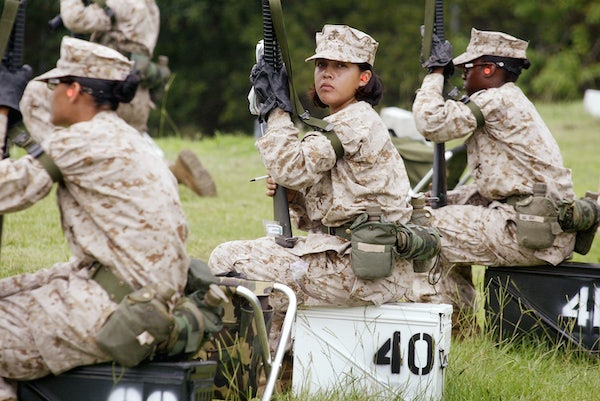 Get ready for a debate about women and the draft that will surely not become sexist in any way.

Yesterday, the Senate approved the National Defense Authorization Act, essentially the annual “must-pass” defense bill, which includes language that requires women born on or after January 1, 2018, to sign up for Selective Service on their 18th birthdays.

Women and the draft has long been a line in the sand between conservatives and ultra-conservatives. Supporters of the bill include Mitch McConnell, who said, “Given where we are today, with women in the military performing virtually all kinds of functions, I personally think it would be appropriate for them to register just like men do.”

Ted Cruz, who wields the sword of righteousness for women everywhere, has consistently opposed the inclusion of women in the draft: “I cannot in good conscience vote to draft our daughters into the military, sending them off to war and forcing them into combat.” During the debate over the Equal Rights Amendment in 1970, Phyllis Schafly repeatedly invoked the draft to stoke the fear of women in combat, arguing that, with the passing of amendment, “Congress would be constitutionally required to draft women on the same basis as men.”

Since the reinstatement of registration in 1980, four cases brought before the Supreme Court upheld the non-registration of women because they were excluded from combat duty. Once that restriction was lifted in December of 2015, top military commanders said they would support including women in the draft. But like the best kind of debate, this one is largely symbolic: In order for women to be drafted, Selective Service would itself need to be reinstated, which would require a separate, and highly contentious, act of Congress.

Still, the House’s version of the bill has the gender-neutral language removed, and it will have to be reconciled with the Senate version. So ladies, gird yourself once more for an explosive debate in Congress about what should and shouldn’t be expected of you.